You won't believe how easy it is to make homemade cinnamon rolls! No yeast and ready in 30 minutes. These cinnamon rolls are heavenly! They're sweet, gooey, fluffy, and incredibly delicious.

I've discovered a way to make THE BEST cinnamon rolls with very little effort. I use store-bought refrigerated biscuits and these yeast free rolls couldn't be easier to make.

Refrigerator biscuits are made from a stiff bread dough that is refrigerated to become even stiffer. The dough is typically shaped into logs which are sliced into rounds before baking. They can be found in the refrigerated section of most American grocery stores. Unfortunately, in the UK, they are not readily available.

Why I Love This Recipe

RELATED: 20 Single Serving Breakfast Recipes Worth Waking Up For

How To Make This Recipe

Slice the dough into 1-inch pieces and place them in a small lightly greased baking dish.

Bake these mini cinnamon rolls for 20 minutes, remove them from the oven and spread a layer of cinnamon roll frosting made with powdered sugar and milk over the warm rolls.

I use either a small 6-inch cast iron skillet or a loaf pan for this small batch of cinnamon rolls.

Can You Freeze Cinnamon Rolls?

Yes! These small batch cinnamon rolls freeze well. Place the cut rolls into a freezer safe dish, when you are ready to enjoy them, take the rolls out of the freezer, thaw and bake.

How Can I Make Overnight Cinnamon Rolls?

After rolling the cinnamon rolls, cut them as directed, arrange them in your pan and cover well with plastic wrap. Refrigerate them overnight and in the morning take the pan out of the fridge and let them come up to room temperature before baking as directed in the recipe.

Although homemade cinnamon rolls are a treat by themselves, you might like to serve them with these easy breakfast recipes:

If you’ve tried these cinnamon rolls or any recipe on One Dish Kitchen please let me know how you liked it by rating the recipe and telling me about it in the comment section below.

If you take a picture please tag us on Instagram (@onedishkitchen) we’d love to see! 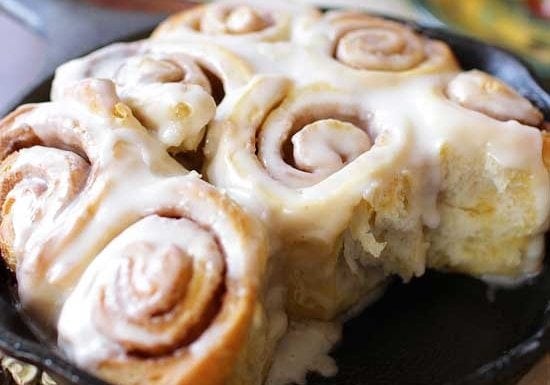 The information shown is an estimate provided by an online nutrition calculator. It should not be considered a substitute for a professional nutritionist’s advice.

Receive Our Latest Single Serving Recipes!Sign Up for the weekly One Dish Kitchen Newsletter!!

Joanie Zisk is the creator of OneDishKitchen.com, the number one go-to site for single serving recipes. The aim of One Dish Kitchen is to inspire individuals with access to single serving recipes that will enable them to enjoy the preparation of a meal that will nourish both body and soul. Her website is filled with hundreds of easy, flavorful recipes that are tailored for those cooking for one. Joanie is the author of "The Ultimate Cooking For One Cookbook" and her recipes and food photography have been featured in various publications including, TODAY.com, Huffington Post, Real Simple, Self.com,Women’s Day, Buzzfeed, and others. Come say hello and follow Joanie on Facebook, Twitter, Pinterest, Instagram and LinkedIn.

Welcome to One Dish Kitchen, I’m Joanie and I’m incredibly happy you’re here! Our aim is to inspire individuals with access to single serving recipes, education, and a supportive community that will enable them to enjoy the preparation of a meal that will nourish both body and soul.